A Quick Look at the Evolving Nature of English

A Quick Look at the Evolving Nature of English

English is the common language of the world. It is a highly flexible, ever-growing, ‘Living’ language that receives additions of thousands of words every year. The ubiquitous nature of English is the twin product of British colonialism and the hegemony of the USA. Consequently, English has influenced the development of the internet and vice-versa. The nature of the language makes English a very forgiving language for new learners.

English is the quasi-global language of the world. It is an ever-growing, ‘living’ language. But what does a ‘living’ language mean? In simple terms, it means that the language will never go ‘out of date’: it will keep evolving as time progresses, adding new words, and rendering some words obsolete. In “Origin of English”, you might have learned about Old and Middle English, and how very different they were from the English we now speak. Even the Shakespearian “Modern English”, is far from what we would speak even in the most formal circumstances.

The English of the present, i.e. the Standard English is what is now in use worldwide. But even Standard English has many different ‘dialects’ and forms viz. American, British, Australian, Indian, and many more. The capacity of English to accommodate so many cultures and languages has allowed it to become ‘global’ and ‘living’. 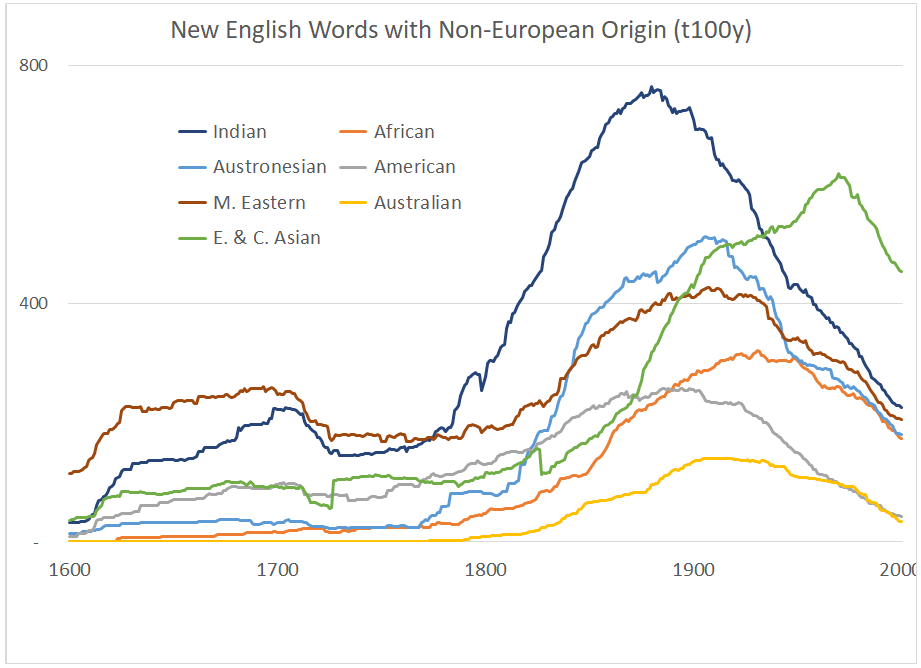 As you may notice from the graph, the inclusion of non-European words in the English language peaks during the 1800s to mid-1900s. That was the colonial era when the British Empire’s reign stretches across the continents. You may be surprised to find that some of these words have origins you would not have suspected! ‘Safari’ comes from Swahili, ‘Boomerang’ is Australian Aboriginal, ‘Taboo’ is Tongan, ‘Tea’ comes from Chinese, ‘Barbeque’ has Caribbean origins, ‘Sugar’ is Arabic, and ‘Shampoo’, ’Pepper’ and ‘Jungle’ originate from Hindi, Indo-Aryan, and Marathi, respectively.

Additions to the English Dictionary

The 21st Century updates to the English dictionaries, be it Oxford English Dictionary, or the Miriam-Webster Dictionary, are an exercise to standardize common English words in hopes of improving vocabulary pertinent to the current times. Many of these words are what many would call ‘slang’ and informal. Undoubtedly, there would be opposition to the inclusion of such words. However, we must keep in mind that back in the days, the words used by Shakespeare were also ‘informal’ for its times.

Influence of the Internet on the English Language

Acronyms were necessitated by the limitations of word count in text messaging. In order to avoid exceeding word count acronyms like TYL,4COL, GHM were used. But with the development of messaging platforms like Whatsapp and Telegram, these acronyms became redundant. In their place, new internet slangs arrived. The current internet slangs include YOLO, bae, selfie, etc. It is difficult to say whether these slangs will get formalized in the English Dictionary since they may/may not have a limited lifespan.

As mentioned earlier, some words have continued to survive in the internet vocabulary while some have become obsolete. One way that might enable the survival of certain words is their entrance into dictionaries. The slang “bae” was added to the Oxford English Dictionary in 2019. However, if these words are not used in daily communication they might not survive in the longer run.

Who monitors language on the Internet?

You might have noticed the emergence and the disuse of certain words which have a political charge to them. Words that were popular and accepted back in the 1900s have become taboo in the 21st century. On the other hand, some other words have gained popularity which was not so much in use.

In the areas of Race, Gender, and Ideology, the usage of some words has a very strong charge to them. Words like Nazi and Fascist have become akin to curse words, while ‘gay’ and ‘queer’ have gained popular acceptance. The central question then is, who monitors and decides which words are politically correct?

In the absence of a central administrative figure, most of the monitoring is done by independent actors on their respective sites. While Twitter moderators regulate speech in Twitter, Facebook does so in its social media platform. This has given rise to a whole new debate on the freedom of speech and expression, the details of which will not be covered in this article.

This is good news for learners of the English language. Unlike other highly structured languages, basic English is more forgiving to beginners. It does not demand strict adherence to rigid rules formulated in the past. Therefore, through trial and error, speakers of the English language can both shape and be shaped by, and according to the evolving circumstances of the world.